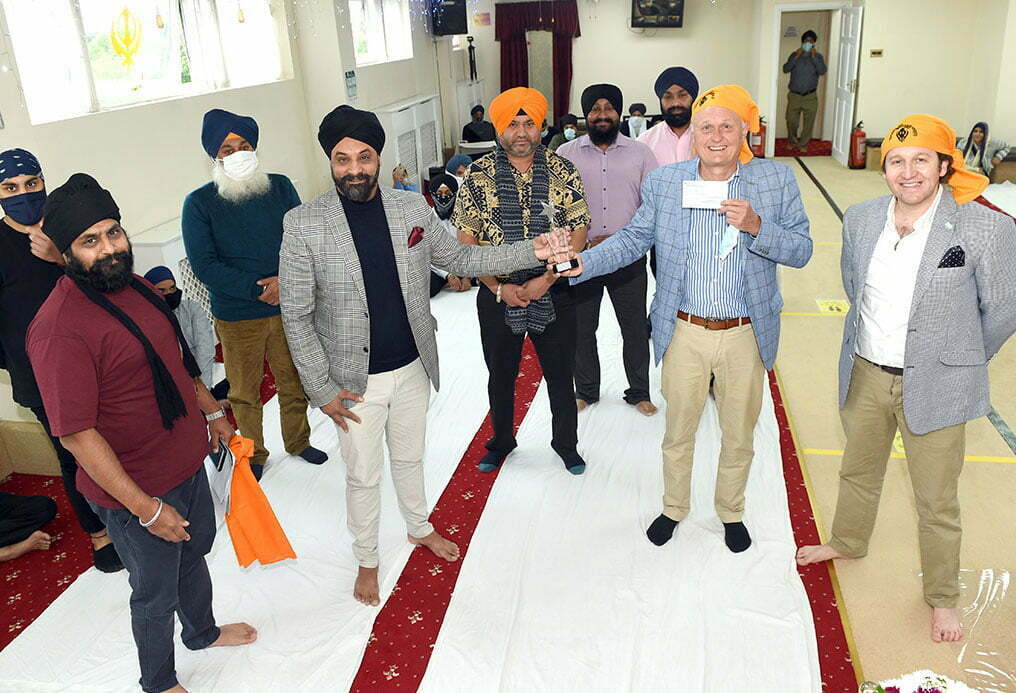 For Fatehjeet Singh and the Sikh community, who provided free food for emergency services during lockdown, the positive feedback they got from these grateful key workers would have been enough of a reward.

But in recognition of their outstanding efforts, the Sikh temple in Lorne Street, Middlesbrough, has been presented with a Teesside Heroes Award from Middlesbrough and Teesside Philanthropic Foundation.

Fatehjeet, who is president of the temple – full name Gurudwara Sri Guru Harkrishan Sahib Ji – accepted the award on behalf of Middlesbrough’s Sikh community. The award included £1,000 for his good cause and a gleaming Teesside Heroes trophy, which Fatehjeet is immensely proud of.

“It’s a part of the pillar of the Sikh religion that we make a vegetarian dish at the Sikh temple and all sit together as a congregation to share the meal together,” explained Fatehjeet. “We have a voluntary service where a group come together and cook the food.

“When Covid-19 hit and the country went into lockdown, the temple was closed, the same as all places of worship.

“But at this time, we felt there was a need to provide food for key workers in the emergency services, such as the nurses who were going through so much, so that they had access to nutritious food and water when everything had been closed due to lockdown.”

Fatehjeet took this idea to the Sikh committee, who began providing between 800 and 1,000 meals every Thursday for police, ambulance crews, fire crews and hospital staff.

The meals were all paid for by the Sikh community, who have vowed to do the same again if there is another lockdown in the local area.

“The sort of feedback we were getting from the frontline workers who received the meals was that it boosted their morale and saved them having to make a trip to shops that were open for food,” said Fatehjeet.

“Some of the staff had gone for six or seven hours of a shift without food and they said we gave them the energy boost they needed to carry on with their important work. “They thought it was unbelievable and were so grateful, which was all the reward we needed for our efforts.”

However, Fatehjeet, whose Sikh community also provides food for up to 40 homeless people every Sunday from Zetland car park in Middlesbrough, gratefully accepted the Teesside Heroes award from Middlesbrough and Teesside Philanthropic Foundation, describing it as an “honour”.

To show their gratitude for the award, Fatehjeet and the Sikh community presented representatives of the Philanthropic Foundation, including patrons Ian and Adrienne Stark and foundation trustee Alisdair Beveridge of the Build Directory, with a special garland as a blessing from the Sikh Temple.

“We felt so proud of this achievement,” he said. “We had never been given an award before and we do a lot of voluntary work as it is a pillar of our Sikh religion to help mankind. “As a president, I felt so proud of my local Sikh community. We don’t do it for our own rewards but getting the reward has helped raise awareness of the Sikh religion and what can be achieved in the community through voluntary service.”

“We hope that, when we get back to some normality after Covid 19, members of the Philanthropic Foundation will sit down for a meal with us to give thanks for what has been achieved.”